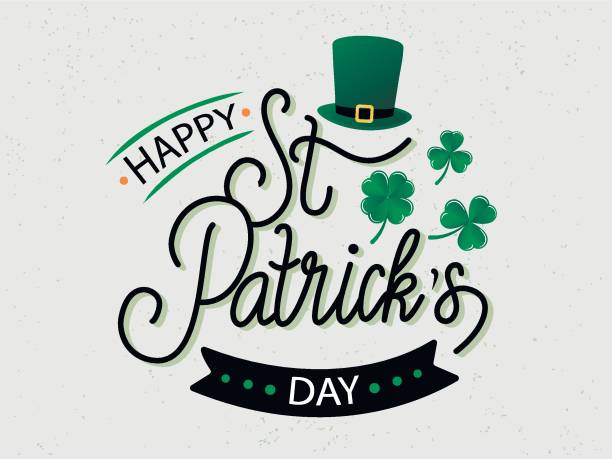 March 17th is a special holiday around the world, it’s St. Patrick’s Day.

All Irish people, all those who are Irish descents and those who like to party all agree that this is the occasion to celebrate with a good beer.

Beyond the festivities, there are also traditions, but first of all here are its origins.

The origins of Saint-Patrick

Saint Patrick is the patron saint of Ireland, a 5th century missionary evangelizer, who according to legend during a sermon at the Roc de Cashel (Ireland) explained the concept of the Holy Trinity, using the shamrock as a reference, this which becomes one of the symbols of Ireland. In fact, legend says that during this sermon he banished all the snakes from Ireland (the symbol of Celtic polytheistic beliefs).

St. Patrick’s Day is a holiday celebrated not just only by the Catholic Church. It is also recognized by the Orthodox, Lutherans and the Anglican Church of Ireland. 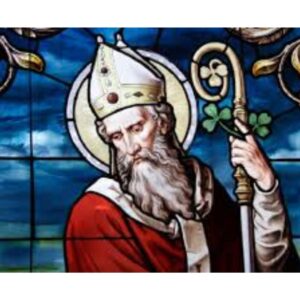 When I was a kid and a teenager, on St. Patrick’s Day I dressed in green. Now as an adult, it’s an opportunity to go out with friends, to have a beer and watch the parade on the streets of Quebec City. Moreover, if you speak to a Québécois and you ask him if winter is finally over, he will surely tell you no. A last snowstorm will fall: the Irish storm. It will be the last to mark our winter.

Quebec was the gateway to many Irish immigrants during the Great Famine (between 1845-52). After the quarantin on Grosse Île, they settled across North America. New York, Boston and Chicago have this history in common with Quebec. These are the cities that will welcome this new immigration (next week you can learn more about their history).

Surprisingly enough, the history of the St. Patrick’s Day parades first appeared in Boston in 1737. Slowly, major Canadian cities will also have the tradition of organizing a parade. It was not until 1903 that Ireland held its first parade to celebrate St. Patrick’s Day.

In Canada, the first parade was held in Montreal in 1824. From that day the festivities for March 17th will be an annual meeting. This is the meeting place for families, young and old of all origins waiting on the sidewalks, braving the cold and sometimes snow, to hear the bagpipes.

Throughout its history, the Montreal parade will sometimes take on a political flavor. In 1840, there will be a massive arrival of Irish Catholics from the land of the great famine. The holidays will be purely religious of Catholic belief, which will shock the Irish Protestants who will feel less and less welcome.

Also at the beginning of the 20th century, Ireland entered a dark period in its history, a civil war, and was shaken by an independence movement. The Montreal parade will be influenced by an openly independentist group: Ancient Order of Hibernians (AOH), who will mark this parade with political slogans and banners.

“Irishmen defied the elements…they marched…behind their large emerald banner flanked by the green, white and orange flags of the new republic” – the first occasion on which this emblem has been publicly carried in a St. Patrick’s Day parade in Montreal.

Elsewhere in Canada parades will be organized. Toronto will be marked by an event in 1878. A violent confrontation between the Irish Catholics and the Irish Protestant, which ends the parades in this city until 1988.

Quebec City will have its first parade in 1837. And even today their visits to old Quebec City are followed by crowds.

Now, during the parades, it’s a chance to admire bagpipers, Celtic dance troupes and feel the ‘joie de vivre’ of this special day.

When you think of Ireland, certain images will pop into your mind.

The shamrock (Seamrog in Gaelic) is surely the first. It will become the Irish national symbol. Associated with St. Patrick and the Holy Trinity but also with luck all over the world. Don’t be surprised at the festivities to see it painted on a cheek or worn over clothes and hat. 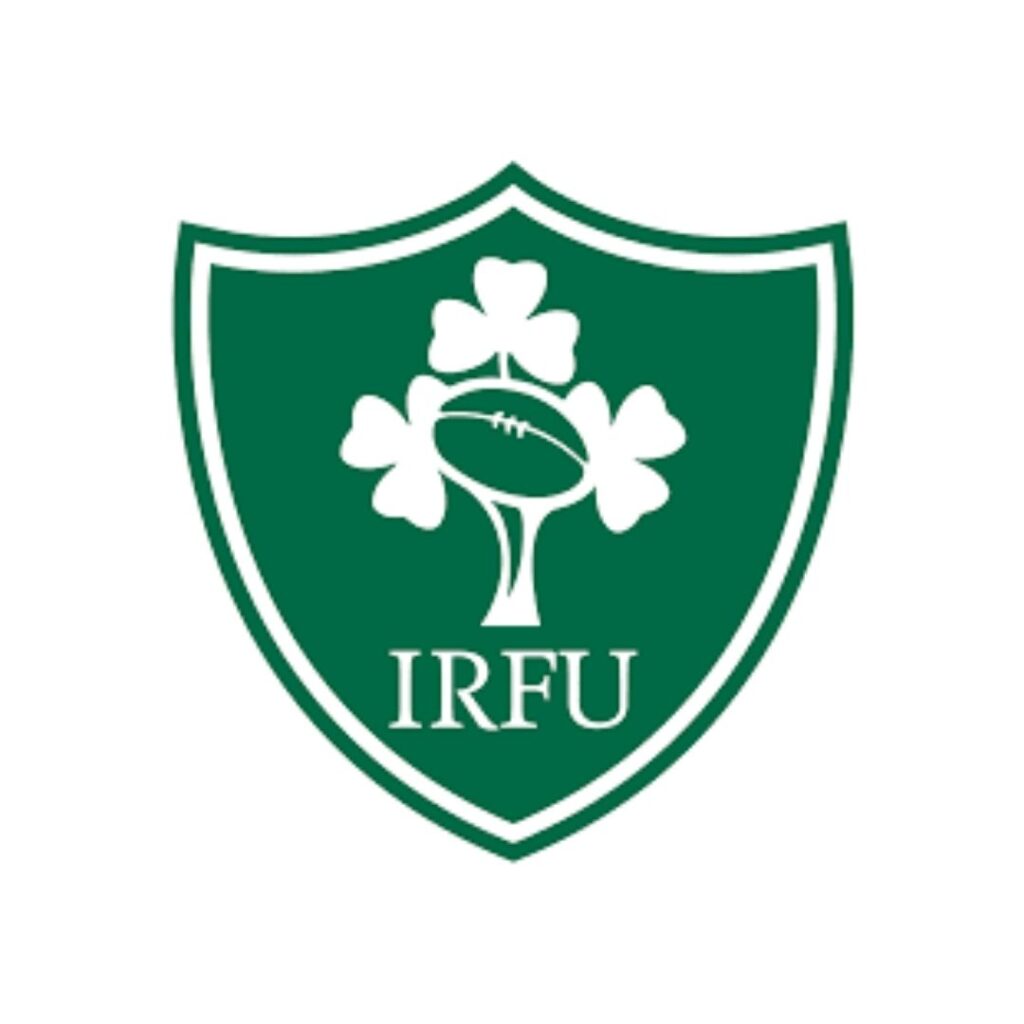 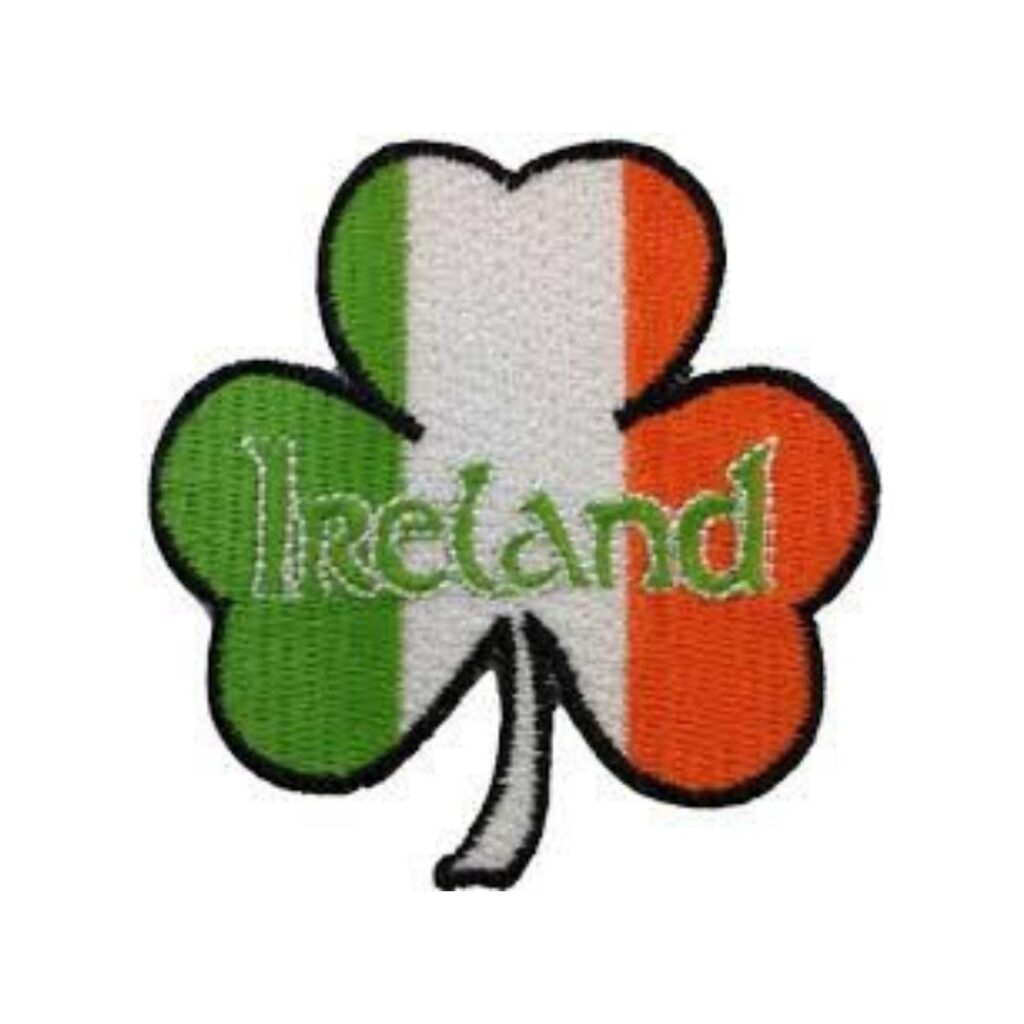 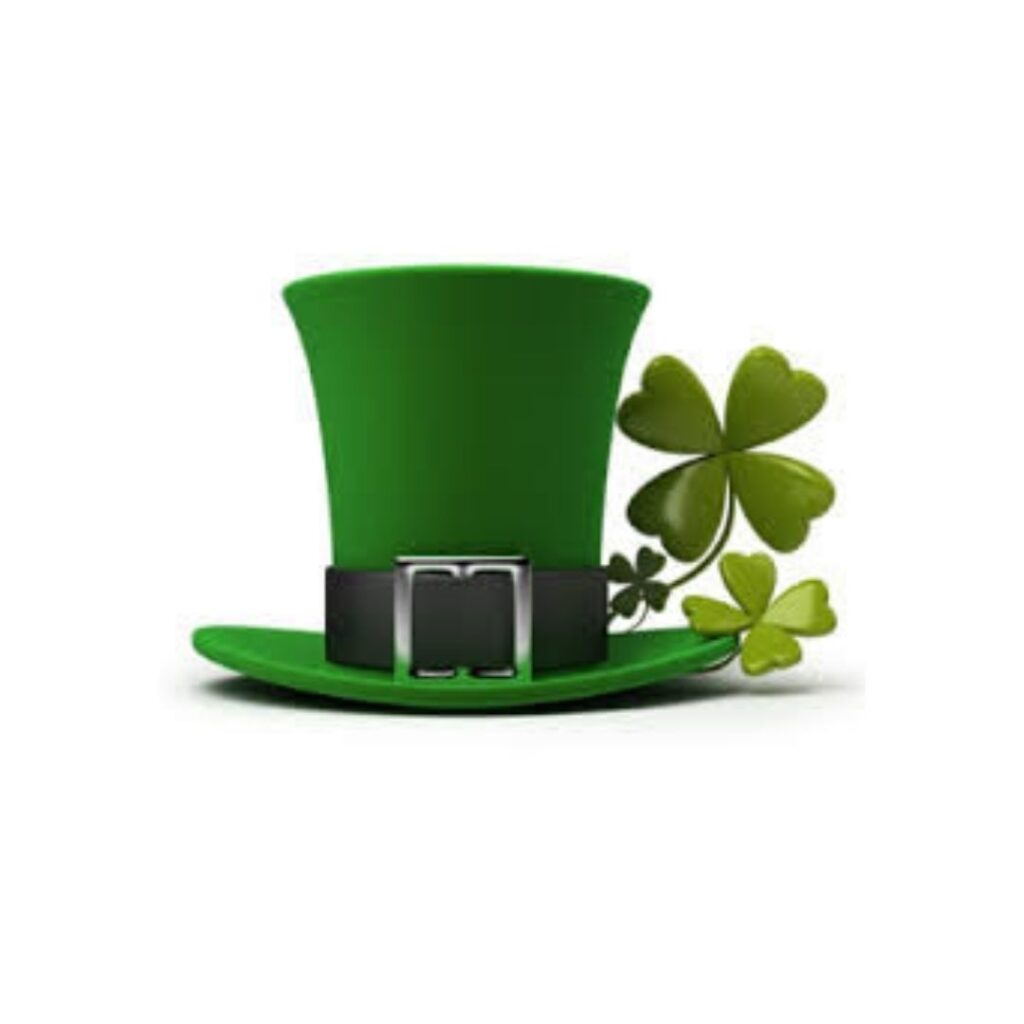 My Favorite, Leprechaun and its cauldron of gold :

When an Irishman says it, “it is luck, happiness to be Irish“.

The little leprechaun who from official source measures 90 cm, dressed in green and his shoemaker’s apron. He is known for his bad temper. He doesn’t really like humans. Besides, don’t try to approach him, he runs faster than you or disappears magically … Maybe you can watch as he tastes some dudeens (small liqueur of their own) and smoke a pipe. By the way, if you ever see one, take a look around it : you might see its cauldron full of gold. Usually he hides it under a rainbow … so good luck finding it. 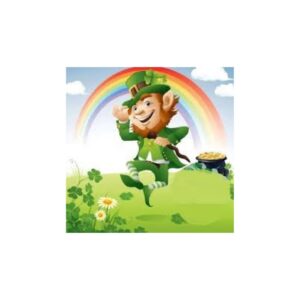 Another Irish national symbol is the Celtic harp. This truly unique musical instrument whose origins date back to the Middle Ages. The Celtic harp emblem seen from the side is used as a symbol of the strong Irish identity. By the way, there are very few old copies, only 3 of them. The best known is the one on display at the Trinity College Dublin, in Ireland, the Brian Boru Harp, the Irish coat of arms. 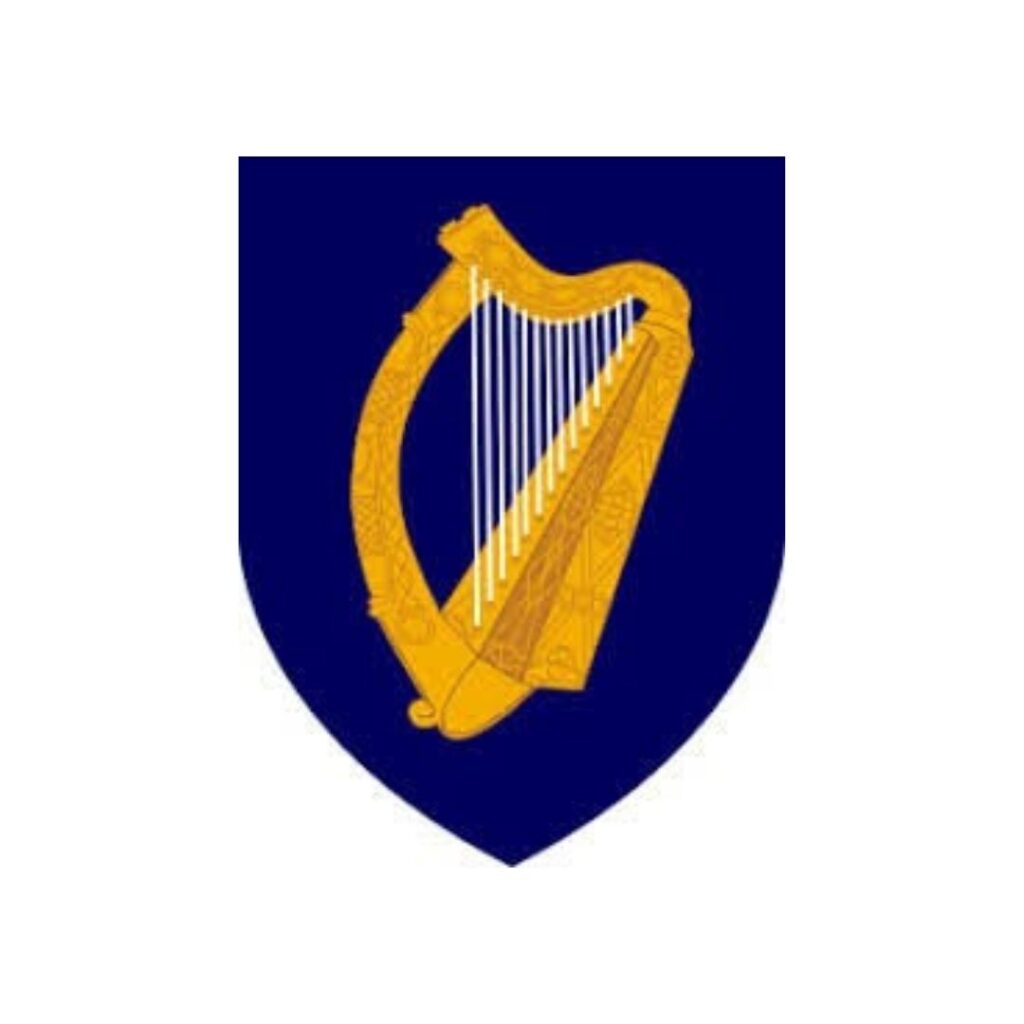 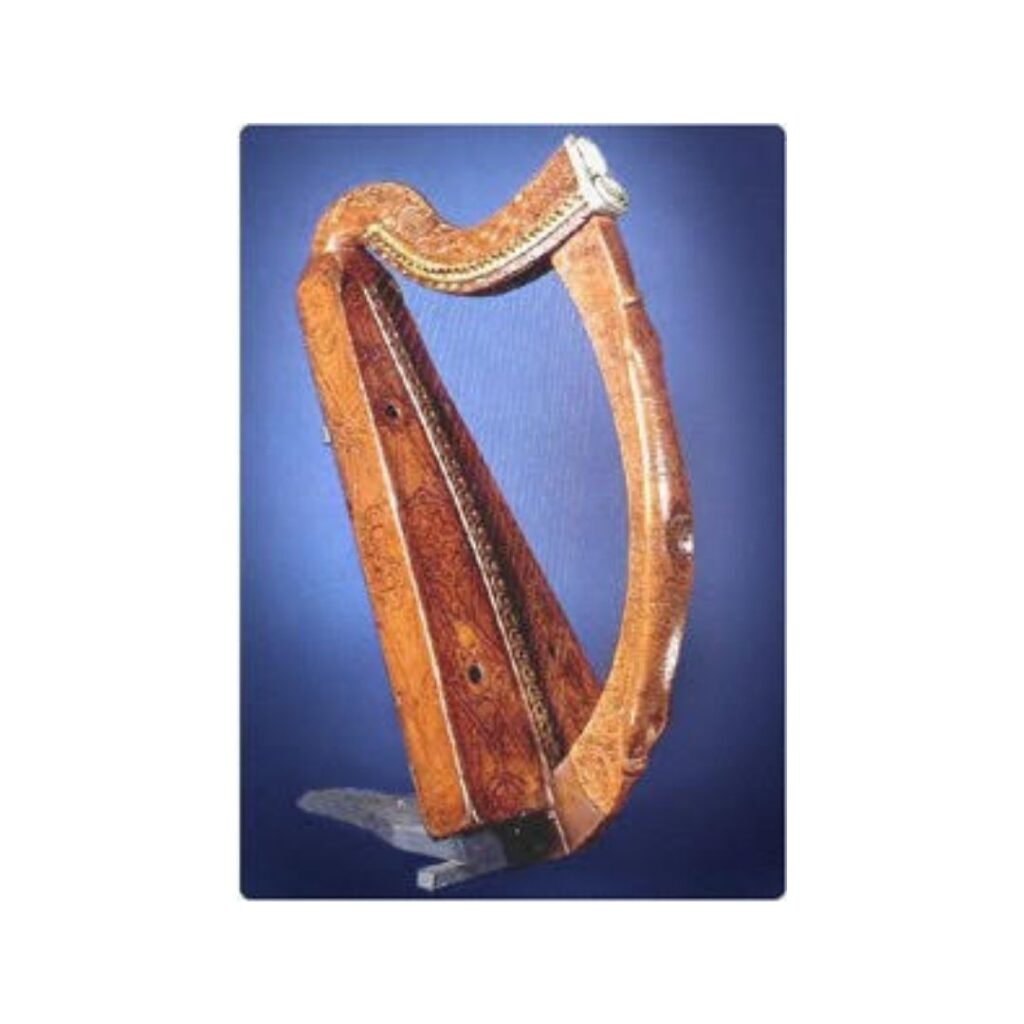 Here are a few examples, the Guinness brand has used it as a logo since 1876.

Closer to us, if you go into the main hall of the Hôtel du Parlement du Québec, you will see this engraved Celtic harp. Eugène-Étienne Taché when drawing up the plans for the main hall will include it in the decoration. A tribute to the European nations who have contributed to the social, political, economic and demographic development of Quebec. Of course, these emblems represent the one from Ireland.

Another place in Quebec where you can see this series of emblems is in the entrance hall outside the Gérard D. Lévesque building, the former courthouse in Quebec City.

Unfortunately I have never been to Ireland, but it’s only a postponement. It will surely be one of my next travel destinations. I knew the sheep were in abundance there, besides the ease of raising and the low maintenance they require, people let them graze in the fresh air which causes slowdowns on the roads. For a tourist, it is surely pretty annoying to be stopped by a herd crossing the road, but the picture must be wonderful.

Sheep are part of Ireland’s main economy. Their wool is the raw material of the famous Irish sweaters and especially the famous tweed this fabric so fond of keeping warm.

This is the magic phrase you need to know in pubs in Dublin or Galway or Cork.

Cá mbeidh tú ag fliuchadh na seamróige ? – Where are we going to get wet the shamrock ?

(Really funny to invite someone over for a beer with you.) I like this one, I think I’ll adopt it. 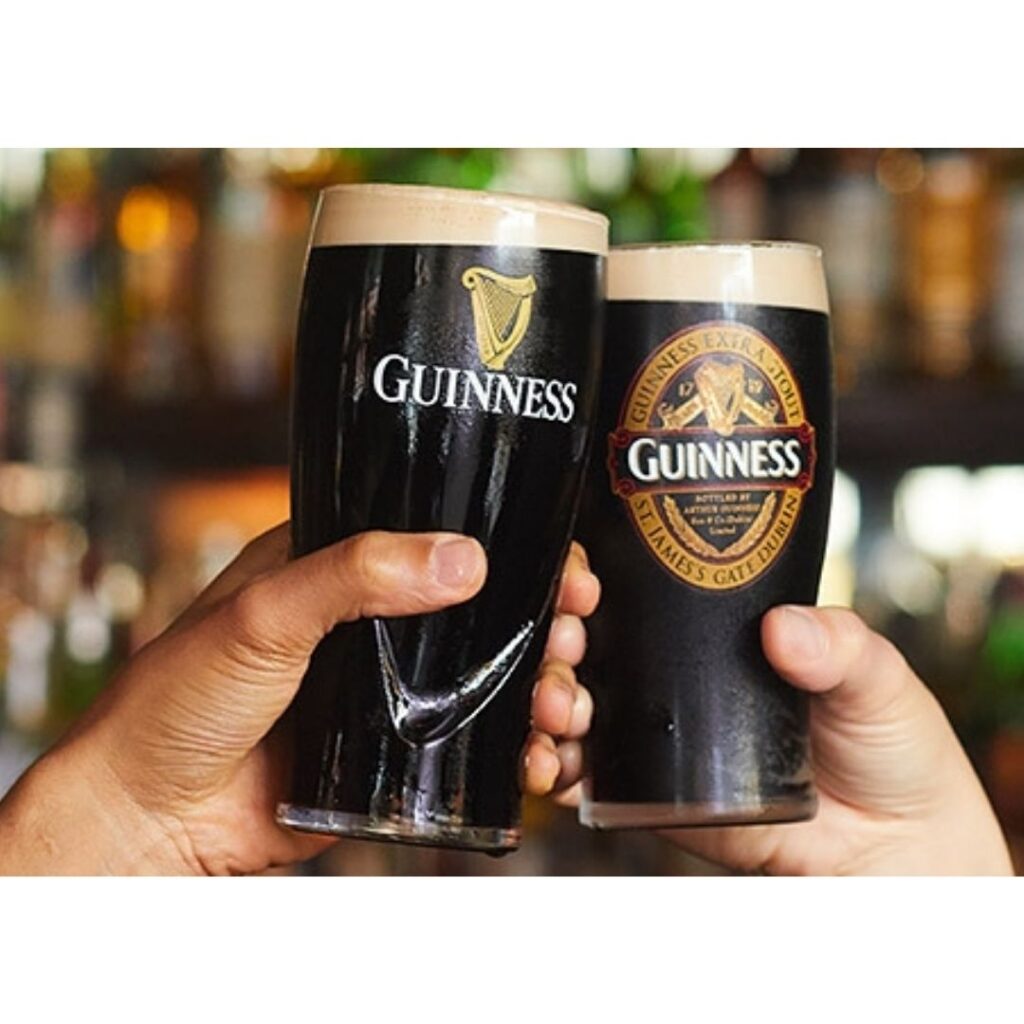 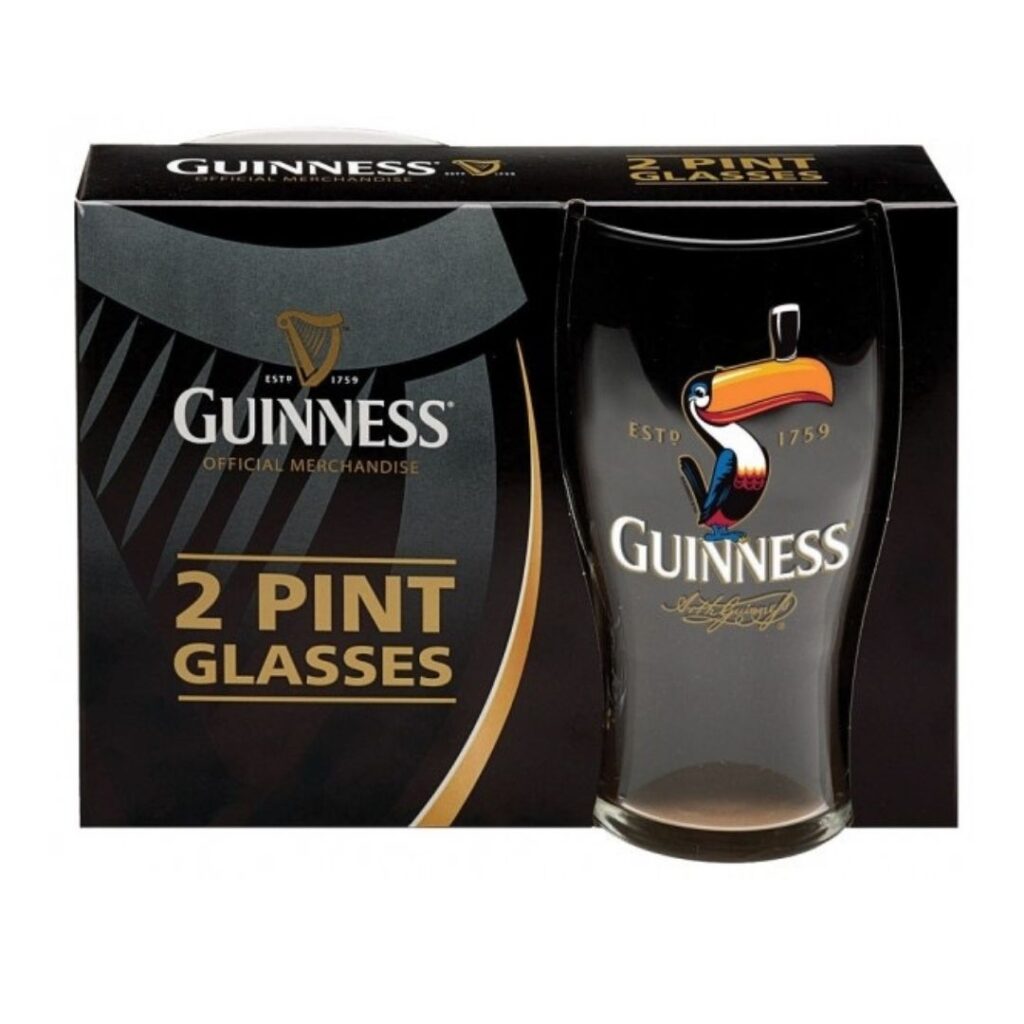 This opaque black beer is topped with a white head. It became a symbol of Ireland across the world. This is surely the best known of the stout-type beers. Its history dates back to 1759, when Arthur Guinness founded his brewery near Saint James’ Gate in Dublin. Little did he know that one day more than 1 million pints of Guinness would be sold in Ireland every day and 10 million pints in the world a day.

Its advertising brand is of course Brian Bory’s Celtic Harp, the one you can see at Trinity College, but also the Toucan since 1940, as a result of an advertising slogan that had been launched. 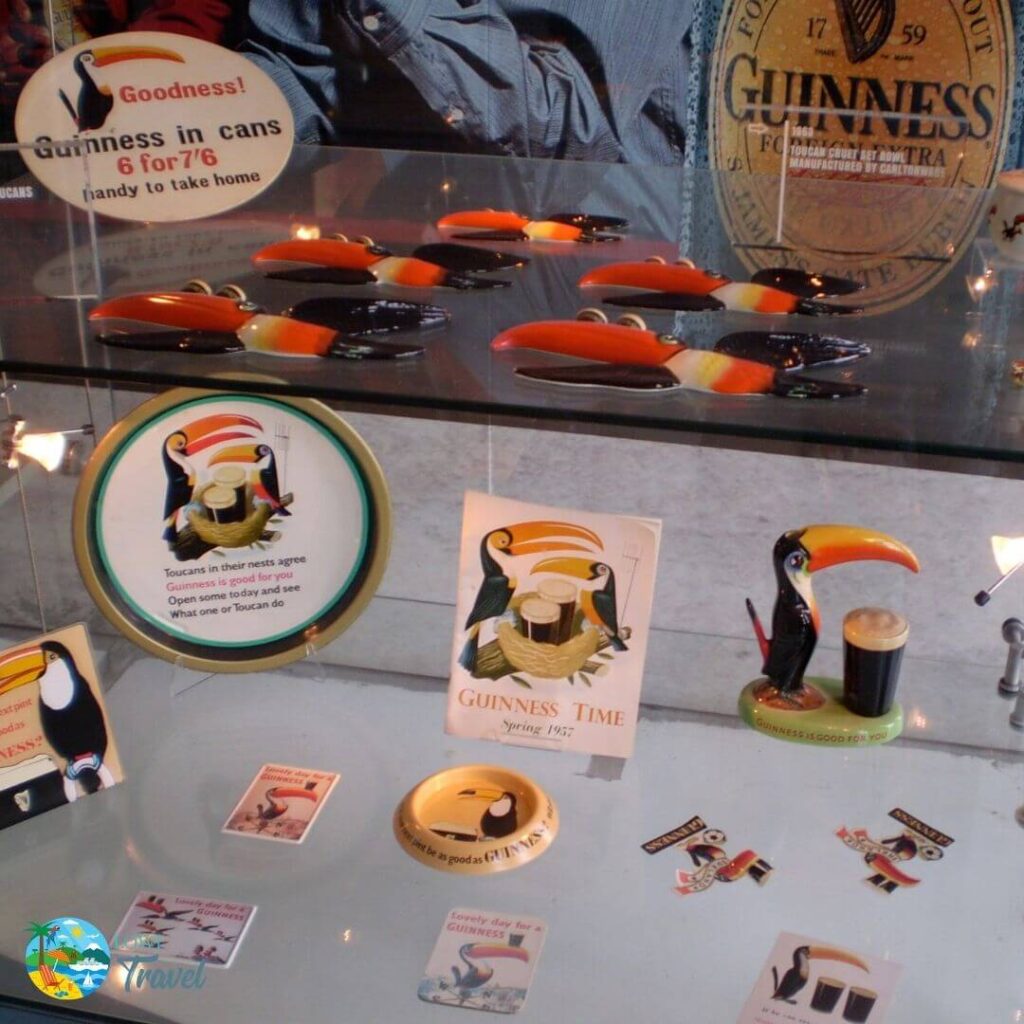 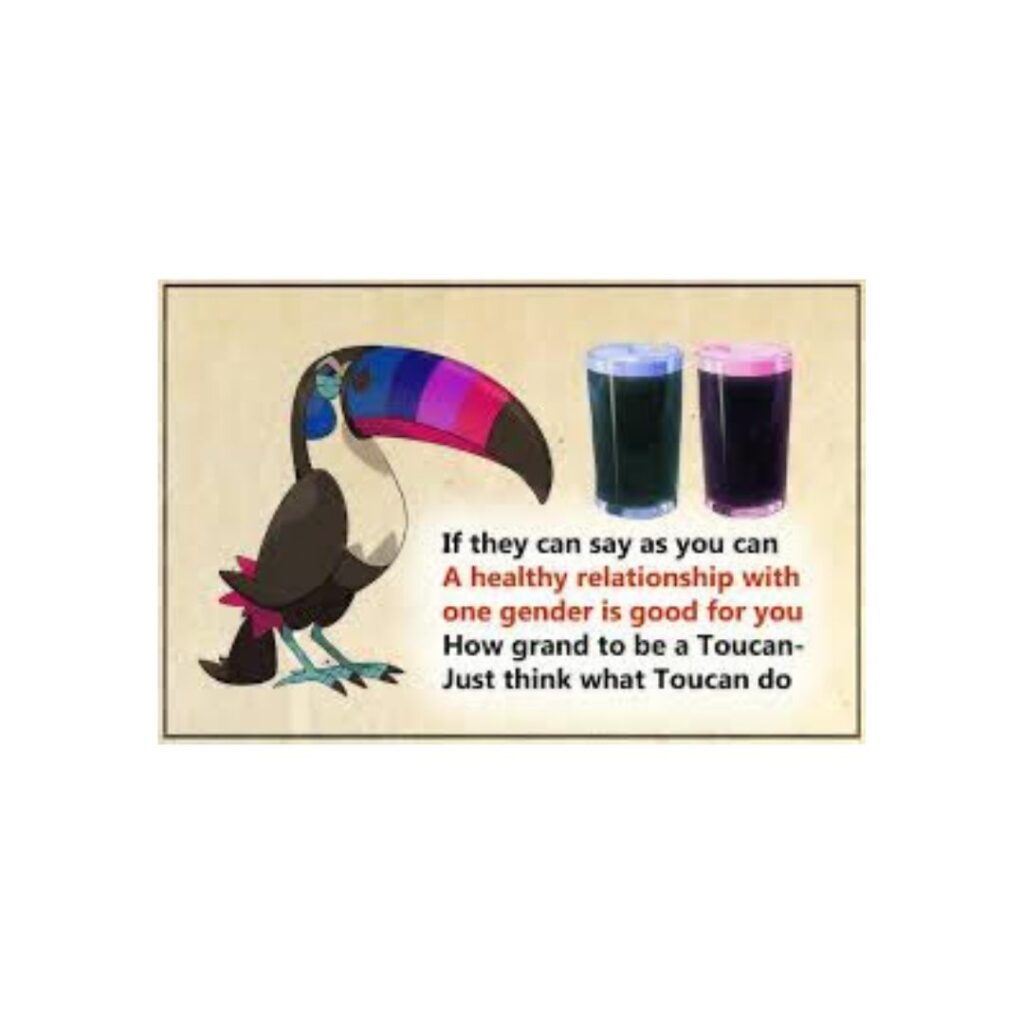 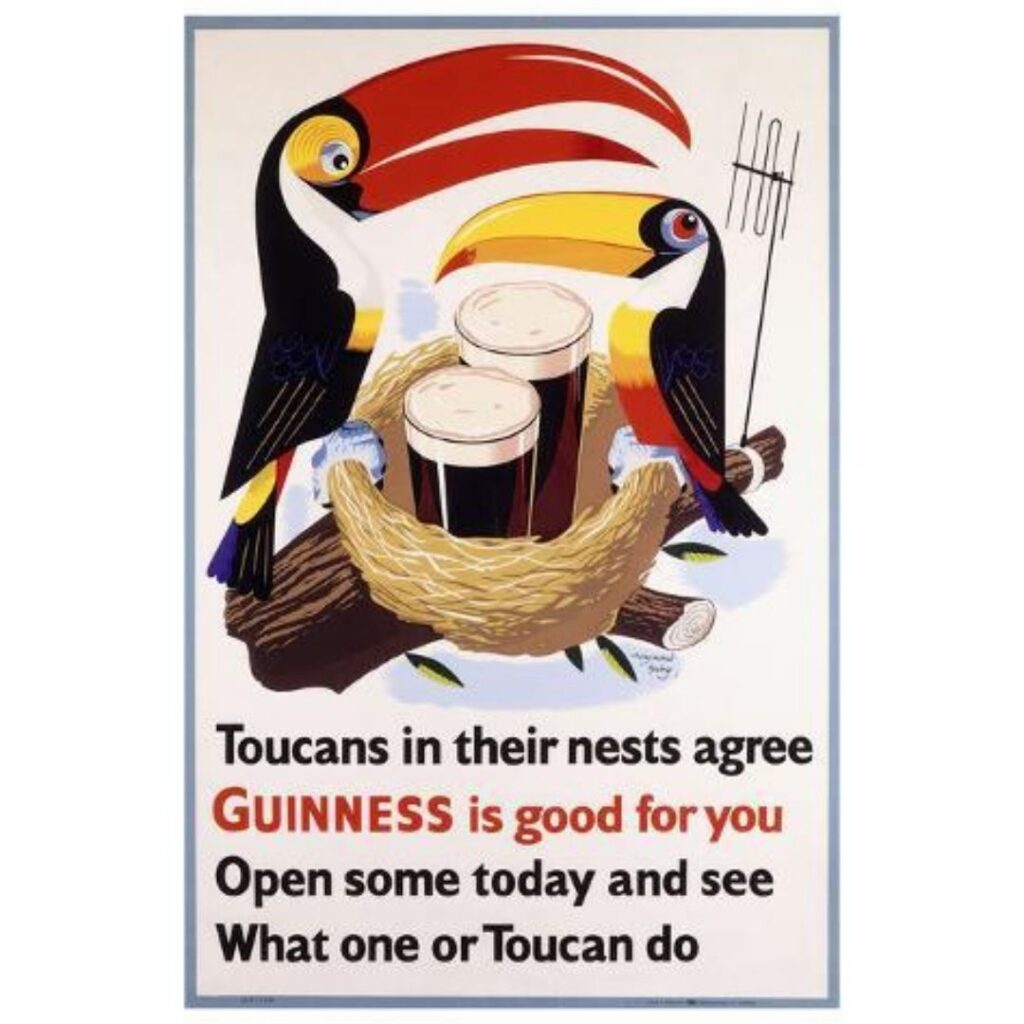 ‘Toucans in their nests agree. Guinness is good for you. Try some today and see what one or toucan do.’

Indeed, in English the game with the words is one can or two can … (Toucan) in order to invite people to take more than one per day.

Form my part, I’m not a beer lover, but when it comes to black beer or stout, I’m always a volunteer. For me, my earliest memory of dark beer dates back to my childhood. Even if my parents don’t drink much, it’s more Christmas and New Year’s Eve party memories or a picture of my grandmother enjoying a Porter Champlain. 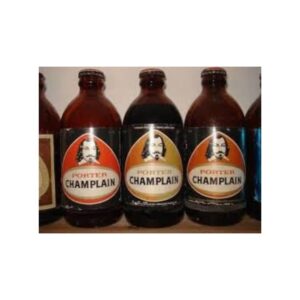 The history of beer in Quebec

The history of beer in Quebec dates back to the New France. Indeed from 1620, the beer will be brewed on the territory. The first recognized professional brewer was Louis Prud’homme in 1642. But we owe the intendant Jean Talon, who arrived in Quebec in 1665, the first commercial brewery.

From its beginnings in New France, and after the English conquest, the monopoly will be in the hands of three producers, Molson (the oldest brewery in Canada since 1786 and still run by this family), O’Keefe and Labatt. In the early 1970s, there was a craze for the development of micro-breweries across Quebec, whether artisanal or commercial.

Today there are 272 brewing companies in Quebec, 74 of which are artisan brewers. In 2002 there were 33 a nice evolution, (Data from AMBQ November 2020). There is demand from Quebecers, who are looking for beers with different aromas and amalgams. Many will embark on the great adventure of beer production. During the 1980s, Brasserie Massawippi, Le Cheval Blanc, Les Brasseurs du Nord, La Schoune and many others marked the beginning of a great brewing adventure in Quebec.

The best way to taste the exceptional products made in Quebec is surely the various festivals organized throughout the province.

If you are passing through, and want to taste Quebec products, I have created activities for you, hoping that you will join me : 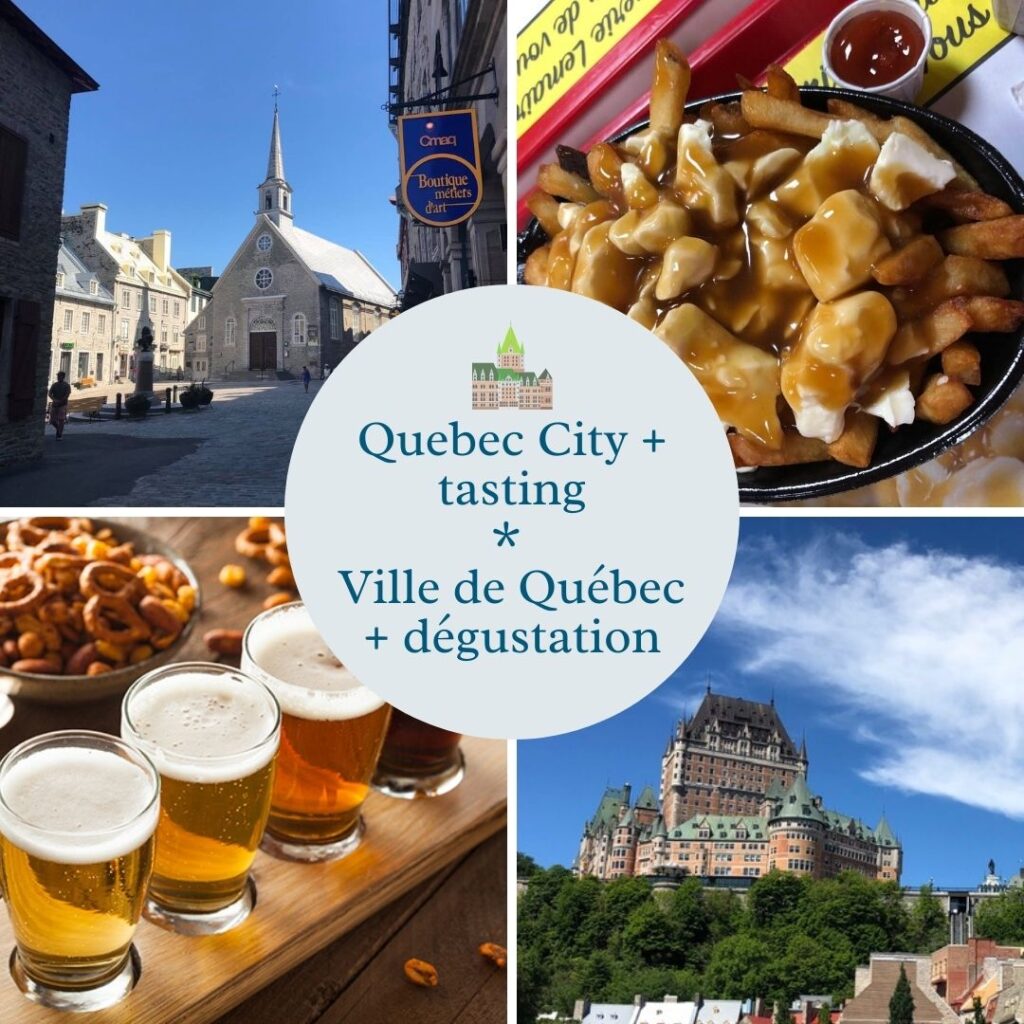 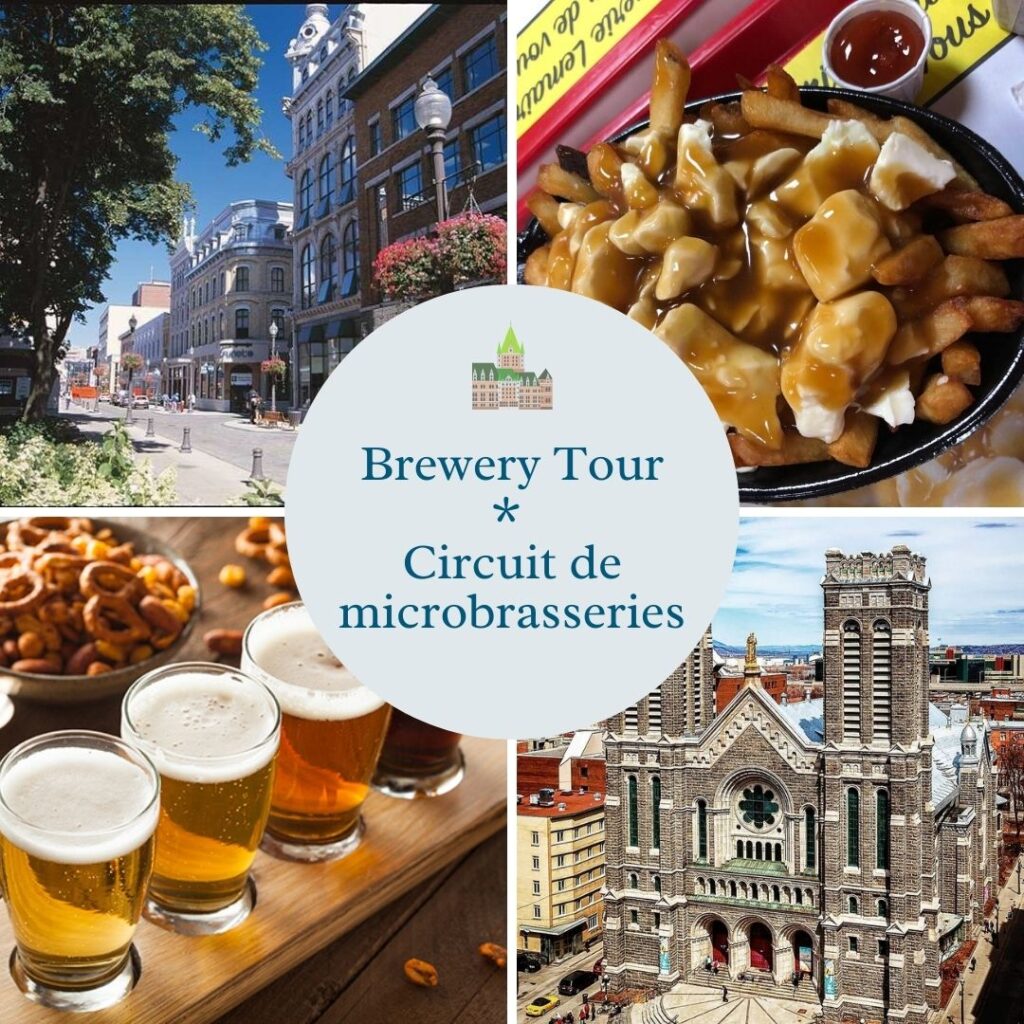 Brewery tour in the Saint-Roch and Saint-Sauveur district

Until then, I wish you happy St. Patrick’s Day festivities. 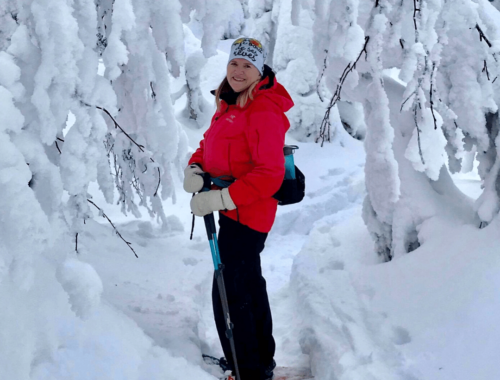 My Quebec in winter 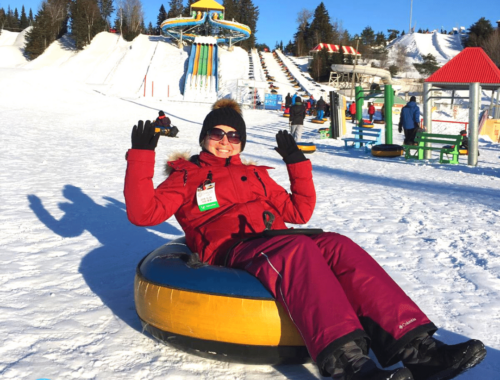 How a foreign sees the winter in Quebec 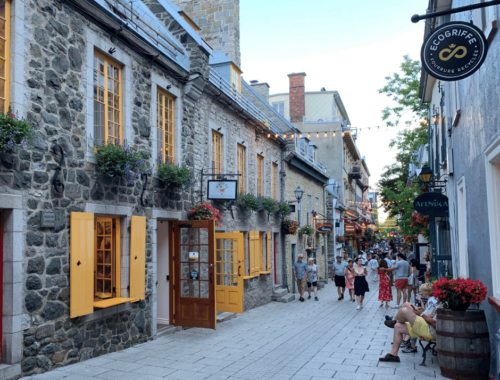